The Simpsons is far and away one of my all-time favourite TV shows. No matter how many times I re-watch an episode, it still makes me laugh. It helped shape my sense of humour, and I quote lines from episodes all the time. In fact, I’m not convinced I even know how to hold a conversation, but instead, have learned how to communicate through Simpsons quotes.

But what I didn’t realise was that all this time, I was actually learning valuable lessons about a vast spectrum of things. So today, we are going to have a look at the 3 money lessons we learned from The Simpsons.

Lesson 1 – Greed will get you shot!

Well, maybe not literally shot, but if there’s one thing I learned from the “Who Shot Mr Burns?” episodes, it’s that greed will come back to haunt you.

I’m sure you all recall that through several nefarious acts, Mr Burns steps on the toes of just about everyone in Springfield, resulting in almost all individuals conspiring to shoot him. The payoff that old Burnsy was after? Money and power.

We see power grabs in real life all the time, so this concept shouldn’t be too foreign – just look at the perpetually revolving turnstile that is Australian politics for example. Burns’ motives are base, which is frankly what gets him into so much trouble. He thinks only of himself and as a result, generates fear amongst the masses he has crippled, falling victim to an act of desperate violence of his own making… well, he would’ve, had Maggie Simpson not gotten to him first.

Greed is a sure fire way to garner enemies and whittle away your friends…and it’s hella lonely at the top.

This one is pretty obvious, so I won’t go overboard on the analysis. Remember that episode where Homer is recruited by Mr Burns to be his “Executive in Charge of Recreation”, or more accurately, his “Prank Monkey”?

In order to pull in some much needed extra cash to support his family, Homer resorts to humiliating himself for Mr Burns’ pleasure. In hindsight, that storyline is pretty damn dark and depressing, but it’s a fairly literal parable that I think we all need to remember from time to time. Your dignity should not be for sale, no matter how dire your circumstances. Have some respect for yourself, dag nabbit! 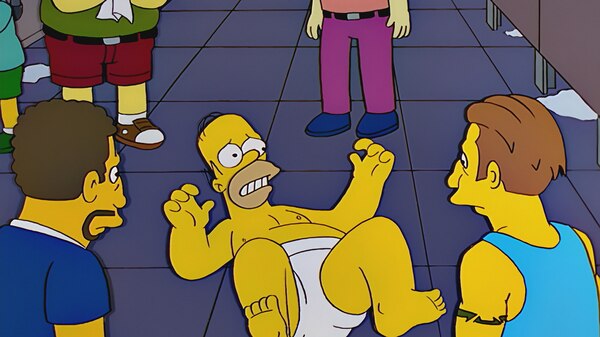 …but it can be used to improve the quality of life of others. I refer to the episode in which Grampa falls in love with Beatrice “Bea” Simmons. Sadly, Bea passes away and leaves Grampa $106,000 with which to do as he pleases. Though he tries, nothing Grampa does with the money brings him any happiness.

It isn’t until a fortuitous trip to an amusement park that Grampa is met by Bea’s ghost. Her simple message is that if the money isn’t making him happy, it should go to those it could benefit. Ultimately, Grampa uses the money to renovate the old folks home to improve the lives of the elderly. Isn’t that sweet? Abe found true happiness through helping others.

Selflessness is seriously underrated. Associating vast sums of money as a metric for happiness and overall satisfaction with life is foolishness. Money can do great things when used properly, and that in itself is always better than squirrelling away large sums of cash for the sake of having large sums of cash.

So next time your parents berate you for “wasting time watching The Simpsons”, you can now tell them that you’re learning valuable lessons about money that the fat cats in Canberra don’t want you to know about!

Why Job-Hopping Can Be a Positive Leap in Your Career