Four years ago, a ‘glitch’ in the Westpac banking system gave a teenage girl access to an overdraft account worth $4.6 million. Now 21-years-old, she has managed to spend $3.3 million in that time, partly on luxury handbags.

Understandably, the bank would like their money back. Also, this was an overdraft, not cash that was placed into her account. Most everyday bank accounts will have access to an overdraft function, allowing you to spend a little more than what you have. These are usually capped to a certain point (well under $4.6 mil) and charge a fee when used.

In other words, the money she spent was credit, and like any credit, if you don’t pay it back, the banks will hunt your ass down.

This is exactly like that episode of The Simpsons where Bart gets a credit card in the dog’s name. Clearly, the prudent message of credit fraud was wasted on this handbag enthusiast. 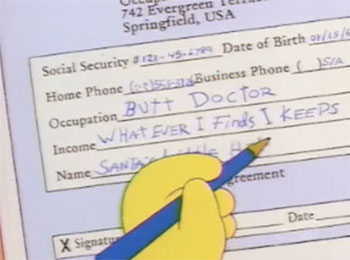 The woman, a chemical engineering student, was intercepted by police attempting to fly home to Malaysia shortly after obtaining an emergency passport. Her lawyer, Fiona McCarron, says the the defendant merely lost her passport and was not attempting to flee the country, despite looking suss as shit.

She was granted bail this morning under strict conditions and is expected to live with her boyfriend. She must report to police twice a day, presumably to be checked for excess handbags.

Police allege that $4.6 million was inadvertently made available to her in 2012 at the age of 17. Had I received that kind of money at such a young age, maybe I would do the same… Actually, no. I’m confident that 17-year-old me would have enough sense to see that a multimillion dollar overdraft account was probably a mistake, rather than an invitation to buy luxury goods.

It’s not like she’s dumb either, chemical engineering is probably hard as shit. It’s clear that this poor woman suffers from acute luxury handbag addiction (LHA) and abuse of poorly appropriated funds is merely a symptom of this cruel affliction.

She will appear in court in June, at which time she will stand in front of the judge, turn her pockets inside out and make a pouty face. That’s how I see it playing out.

Think you might have some LHA? Here’s some quick ways to get out of debt.

How to Travel Without Being an Ignorant Dickhead